What's Bolt and how will my Lockitron order change?

Why are you switching production to Lockitron Bolt?

We’re moving all our efforts to manufacturing Lockitron Bolt for a few reasons:

The first is our ability to manufacture Bolt on a consistent, reasonable timeframe. The mechanical and electronic complexity of building the crowdfunded Lockitron meant that we could only trickle out units at a slow pace.

This stemmed from a high part count (nearly 20 injection molded, die cast and stamped parts in the crowdfunded Lockitron), a complicated manual labor trade-off between electronics and mechanics, part quality issues and extensive rework on every individual unit and a design poorly suited for mass manufacture. We considered re-centralizing the production of our current unit, however this would have entailed months of adjusting tooling, training and migrating test processes which we established domestically to our factory in China.

For Lockitron Bolt we’re working with a new, much higher caliber manufacturing partner who has a demonstrated ability to consistently and reliably build and ship tens of thousands of high quality units per month. Their assembly and test procedures are robust, rapid, and are applied to the Lockitron bolt during production.

We’ve come to think of a partial replacement solution as a flawed approach. The crowdfunded Lockitron did not live up to the promises of ease of installation and many backers opted to entirely replace their lock instead in order to use Lockitron. Throughout 2013 and 2014 we built up an extensive lock library, finding which units Lockitron would consistently work with. However, we weren’t able to source a number of locks which were popular within the last 5-10 years but no longer on the market. When we shipped Lockitron in volume, a small number of customers couldn’t install Lockitron easily on these deadbolts.

For many of our customers, installation wasn’t a problem. But for other customers installation entailed precise adjustments, calibration, and trial and error. Adding on to an existing lock was more time-consuming and wasn't something that ‘just worked’. Replacing the entire deadbolt ensures you have a reliable lock that will work every single time. This is only possible when everything is designed as a complete, constrained system.

We found that we over-designed Lockitron’s embedded capabilities and in turn created a device that was difficult to program with far more limited battery life than originally calculated. Through dozens of design revisions, the crowdfunded Lockitron ended up with an incredibly sophisticated circuit board. We incorporated a number of firsts including our knock sensor element and circuit, as well as the ability to update all three of our micro controllers over the air. The compounding complexity meant that we spent months debugging problems which were deeply intertwined across multiple chips and code bases. Lockitron’s built-in WiFi complicated installation and was very difficult to debug when it encountered poor connectivity.

And for these reasons we decided to refocus on a simple but robust product with accessories and options that deliver the features backers wanted (WiFi connectivity, compatibility with existing keys, and excellent battery life) in a smaller form factor that installs easily, performs consistently, and that we can manufacture quickly and reliably.

When will Lockitron Bolt ship? How confident are you of this timeline?

We've completed all anticipated development and production hurdles for Lockitron Bolt and began shipping the first units on November 24th, 2015. We'll wrap up shipment of units without Bridge by the end of March 2016.

How is Lockitron Bolt different from the crowdfunded Lockitron?

Lockitron Bolt is a replacement deadbolt lock, while the crowdfunded Lockitron fit over your existing door look. This means that Bolt replaces all components of your existing lock.

Most common deadbolts can be swapped to Lockitron Bolt with only the removal of 4 screws and no additional modification to your door (that means no new holes, no additional tools) in 10 to 15 minutes.

We found that certain doors would trigger the knock sensor too easily, thus keeping the crowdfunded Lockitron awake and draining batteries while other doors would require significant knocking before the sensor triggered. The knock sensor functionality in the crowdfunded Lockitron requires a very special, low-power electronics circuit that is not adjustable in the field. Given that we already set our knock sensor to be as sensitive as possible, we decided that we unfortunately cannot offer consistent knock sensing capabilities and are removing this feature for now.

To conserve battery life and allow for instantaneous connectivity, we’ve removed the integrated WiFi chip from Lockitron Bolt and put it into Bridge. Bridge connects Bolt to the internet and allows for full, instantaneous control anywhere you have internet access. Whether you just want to let a guess in or forgot to lock your door on the way to work, Bridge is the perfect solution. It’s important to note that Lockitron Bolt is a standalone product and doesn’t require Bridge for local, Bluetooth Low Energy access or to share access with family and friend. This means you can choose the best Lockitron Bolt or Bolt+Bridge solution to suit your needs and budget.

Lockitron Bolt is a slimmer form factor than the crowdfunded Lockitron, reducing the volume by 51% - see below for a comparison of the two. This means that Lockitron Bolt is far less likely to interfere with any window frame or door handle. 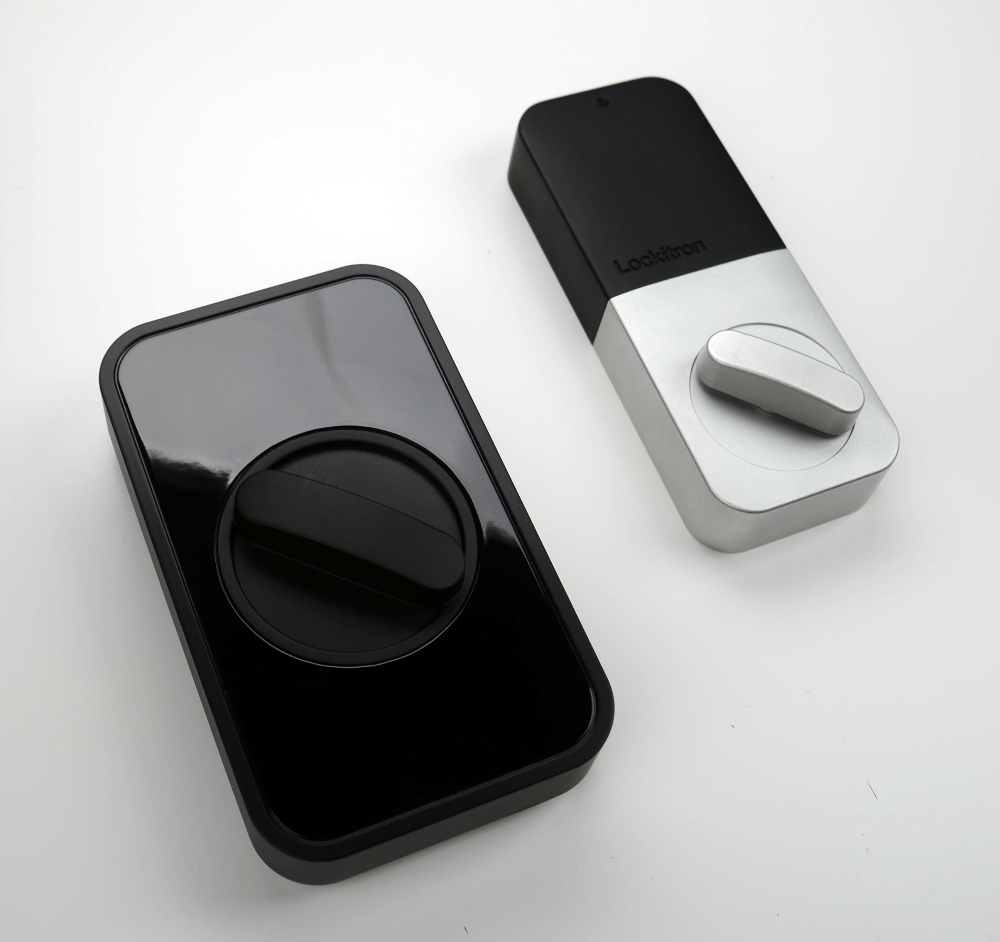 Both the crowdfunded Lockitron and Lockitron Bolt will use the same Lockitron app and receive the same feature upgrades including Sense and notifications.

Can I keep my keys with Lockitron Bolt?

In most cases, yes. We're offering a special feature called Key Match which gives you the ability to select different keyways to match your existing keys with the production variant of Lockitron Bolt. This includes the most popular ones like the five and six pin variants for Schlage and Kwikset. In turn you will be able to take the matched keyway to your local hardware store where it can be pinned to match your existing key for $5-15.

Can I modify my crowdfunded Lockitron order?

We are giving all of our backers who have been patiently waiting the first spots in line for Lockitron Bolt. All current Lockitron backers with existing orders will be given priority based on their current place in line from their previous orders.

If you would like to modify your order to only receive Lockitron Bolt and not Bridge, we will allow you do so once we ship Lockitron Bolt production units at which point we will refund the difference.

How will my crowdfunded Lockitron order be migrated to Bolt?

We have a migration process whereby all crowdfunded Lockitron backers have been sent coupons to place and new order for Lockitron Bolt. If you haven't received an email about migrating your order, let us know at support@lockitron.com. You will receive both Lockitron Bolt and Bridge in your order ($179 value).

I’ve already received my crowdfunded Lockitron unit. Will you continue to support and warranty it?

Yes - we will continue to support the original Lockitron unit and it will gain all of the same benefits from our mobile app updates including Sense and push notifications. As we no longer stock the crowdfunded Lockitron, we will replace any units under warranty with Lockitron Bolt.

Will you upgrade my original Lockitron with Lockitron Bolt?

We sincerely appreciate all of the support from our early backers and know that while many will continue to use their crowdfunded Lockitron, some would like to upgrade to Lockitron Bolt.

As a small company we are limited in the resources we have to replace the crowdfunded Lockitron units in the field, however, as a step in that direction we’re offering 50% off Lockitron Bolt (which starts at $99) to all of our backers to whom we have already shipped the crowdfunded unit to. This means you will be able to purchase the standalone Lockitron Bolt for only $49.

All supporters who’ve received the crowdfunded Lockitron will soon receive an email with this discount. Current backers will receive this discount without having to return their current Lockitron.

Will Lockitron Bolt still integrate with other devices and apps?

Yes! Our goal for Lockitron Bolt is to ensure that it is equally as open as our crowdfunded Lockitron. When paired with Bridge, Lockitron Bolt will work with the same Lockitron API available at https://api.lockitron.com.

This means that dozens of applications that have already been built - including apps for Pebble, Android Wear, Zapier as well as integrations with other devices - like the Ring doorbell - will work exactly the same.

We have a number of other integrations in the works with some fantastic partners and will talking about these partnerships on our blog (http://blog.lockitron.com/).

Will DoorBot backers who ordered a Lockitron receive Lockitron Bolt?

Yes - those who purchased Lockitron through DoorBot will receive Lockitron Bolt in lieu of the crowdfunded Lockitron.

I ordered a Schlage deadbolt that I’m still waiting for. What are my options?

If you’ve ordered a Schlage tapered deadbolt which you’re still waiting for, please contact us at support@lockitron.com. We will either work on expediting your shipment if you’ve already received your crowdfunded Lockitron or cancelling your order if you haven’t received your Schlage deadbolt and will be migrated to Lockitron Bolt.